Let’s continue with two more connections between the Israelites entering the Promised Land, and me visiting Utah’s national parks. (Or, if you’re a fan of wordplay, “between Zionism, and going to Zion.” Or, if you prefer irony, “between a group trying to leave the wilderness, and one trying to go into the wilderness.” OK, enough of that.**)

How does this relate to me? While I haven’t exactly been living in the wilderness eating bland food (unless all that Top Ramen consumed during college counts), I have lived 40-(*cough*)-years wanting to tour Utah’s parks, and I am definitely guilty of looking at the past with Easier-Than-Facing-the-Future-colored glasses.

Hard to believe, I’ve lived my entire life only a few day’s drive from a dream.

My point in all that is this: They declared their intentions, both to themselves and to all those in the land. Grasshoppers? Definitely not.

To declare my intentions, I now present these homemade Grasshopper Bars (chocolate and mint), which represent my declaration to make the journey to Utah’s parks this year. 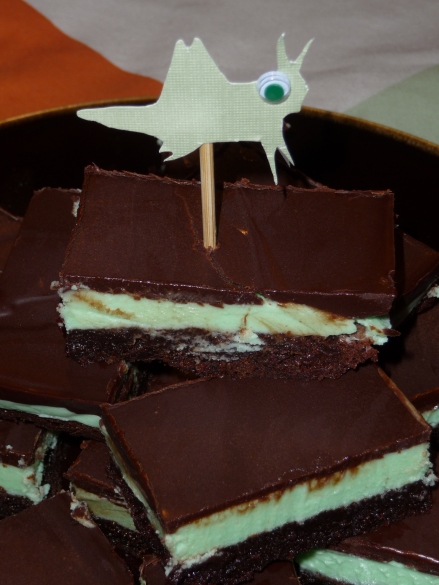 Too literal? A grasshopper on top of desserts? Sorry.

** For a much more legitimate interpretation of desert exile and personal experience, try “Desert of My Days,” by the incomparable Larnelle Harris.

22 He sits enthroned above the circle of the earth,
and its people are like grasshoppers.
He stretches out the heavens like a canopy,
and spreads them out like a tent to live in.