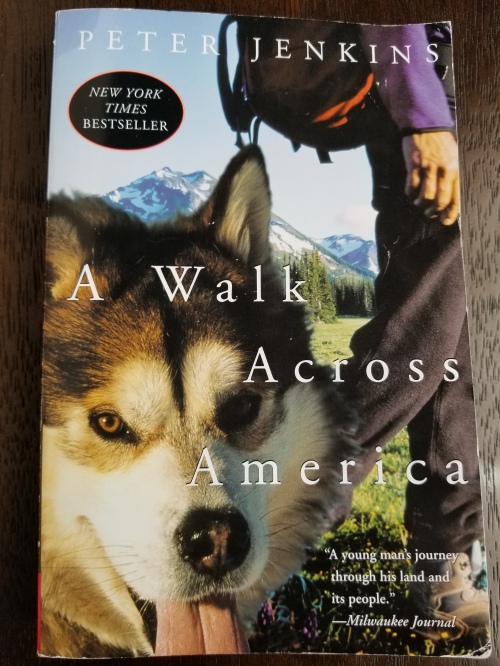 A Walk Across America, a bestselling memoir by Peter Jenkins first published in 1979, chronicles the first ½ of his journey on foot across the USA, stretching from Alfred, New York to New Orleans, Louisiana. The remainder of the journey unfolds in The Walk West (1981).

“One half” is a fitting phrase to describe this story packed with bifurcations. Half about feeling lost, getting lost, and experiencing loss, and half about feeling found (in many ways), finding direction and a newfound sense of purpose, and experiencing connections, hope, renewal and love. Rich and poor, North and South, black and white, Summer and Winter, hippie communes and revival meetings, adventure-seeking and self-reflection, near-escapes and tragic outcomes — all that, plus a mountain man living in a forgotten past who you’ll never forget.

Not only a time-capsule of the early 1970’s, this story of America over 40 years ago is startlingly contemporary: social differences (proving hippies were pioneers for diversity), racial conflicts (hello blended families), and links between poor economies, the sources of healthy food, and good nutrition (setting the basis for everything from the obesity epidemic plaguing America, to the slow-food movement). Need more? How about a mission to confront an infamous, polarizing, media-hungry politician?

The phrase “one half” also describes my memory of A Walk Across America. I originally read this book around about 1980. Peter’s quest to explore the United States left a lasting impression on me. I’d intended to write about the book as the next post describing Campfire Tales influences…

Then I recently re-read it and discovered not only parts or characters I’d either forgotten or missed (things I’d “lost”), but “found” elements that I strongly relate to (for instance, Peter’s love of trees; at one point he even works as a tree doctor) and emotionally identify with (such as Peter’s “adopted” mother Mary Elizabeth; most importantly, the astounding “looking for a sign” conclusion).

2 thoughts on “Book Review: A Walk Across America”