There were three primary causes to the decline of Allensworth (yes, I did listen to some of what the docents said; see the previous post).

1. When the trains stopped stopping locally, which seriously hindered the delivery of goods and services to and from Allensworth, primarily a farming community. 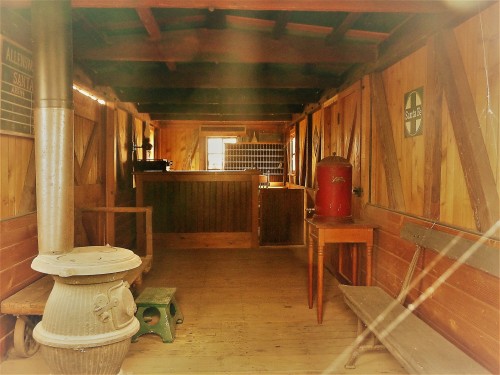 2. Water issues (the story of California; see Hetch Hetchy; the movie Chinatown, etc.). Without water, how could they farm?

3. The death of the primary town founder, Colonel Allensworth.

Whoops! Didn’t mean to go all history lesson on you. Oh yeah! Here’s the schoolhouse, which stayed in use until 1972:

Now tell me, does that look like a ghost town? Oh, that reminds me…

The third person we met in Allensworth I promised to tell you about? The Lawman.

As with The Docent and The Ranger, The Lawman paused to chat while making his rounds. Unlike the others, the park only represented a portion of his territory, and at first Royce and I sought advice regarding local services, places to camp, other sites worth visiting, and so on.

The Lawman proved to be an engaging and entertaining storyteller. I’m guessing that those in his profession all have great stories — note to self: consider lawmen, rangers, and docents as potential Campfire Tales guest hosts.

One thing led to the next, and soon The Lawman began telling us, “Allensworth is haunted” vignettes. His experiences, while patrolling the park at night. Eerie noises, wet footprints on the road. You get the idea.

To be honest, I chalked up everything he said as reasonably explained: teens pulling pranks, vagrants passing through, or…? More his imagination than anything else.

That’s my point. Whereas The Docent and The Ranger approached their Allensworth duties as “protecting the past,” and as a result viewed the town as relevant and alive, The Lawman, just as committed to “protection,” viewed the town as abandoned and haunted.

In my opinion, Allensworth is not a ghost town. Tell me, does this look haunted to you?