An oft highlighted feature of Lassen Volcanic National Park, referenced in every description I’ve so far read about the park, includes a version of this claim:

Represented in the park are all four types of volcanoes found in the world–shield, composite, cinder cone, and plug dome. ~ NPS Website: Lassen Volcanic National Park

In contrast, check out Wikipedia’s list of “Types of Volcanoes/Volcanic Landforms” detailing 26 types of volcanoes found in the world, including all of the above big four except “composite,” which I think Uncle Wiki calls, “Complex.”

Did you catch that? One says all four. One says 26. Let’s visualize that in lava-colored Red Hot candies: 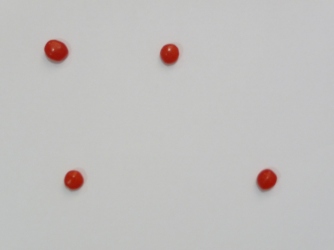 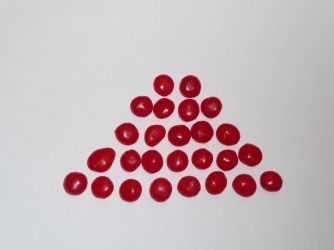 Even after dismissing some of the 26 as “landforms” and not “types,” there is still a big difference between all four and under 26.

Want to drive yourself crazy? Google it. You’ll find official lists of three, four, five, and seven types of volcanoes… (And that’s where I stopped.) Most lists agree on Shield & Cinder. Those dome-type descriptive names, however, are all over the map. (Ha! Get it?!)

I’m guessing the explanation is that the “four types of volcanoes” refer to general volcano structure, and everything else is a slight variation. Kind of how “house, apartment, mobile home and shelter” are all places to dwell, but “mansion, condo, Fifth Wheel and tent” are the exact same things, only more specific.

Hopefully, you are enjoying this, because that was really bad science. “Bad Campfire Tales! BAD!”

Anyway, my point isn’t to provide or debate a definitive list of volcano types. My point is that the NPS list is good enough for me to illustrate the parallels I see between those four volcanic structures and four parts of telling a story. (Yes, four. “This blog post has been brought to you by Says Me Street.” If I previously lost all my scientific experts above, I’ve likewise probably lost all the literary experts now too.)

Let’s recap. Over a series of posts, we will compare the similarities between how volcanoes (cinder cone, composite, plug dome and shield) are formed, aligning them against four elements of telling a story (beginning, middle, climax, ending), and then delving further with some examples of Lassen-related stories that exemplify those similarities.

Hmm, that’s still a little murky, even to me. Please note that the Lassen-related “stories” are more accurately termed, “snippets of biography” (not a highly-recognized literary form), with an emphasis on how Lassen National Park impacted those lives.