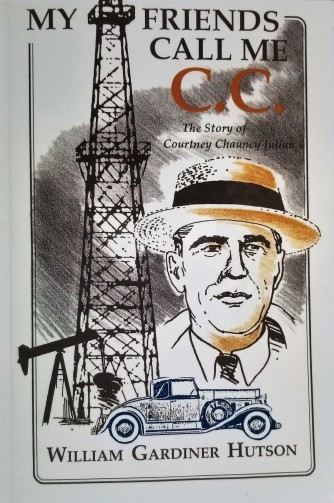 My Friends Call Me C.C. by William Gardiner Hutson is a fictionalized retelling of a decade plus in the tumultuous life of Clarence Chauncey (“C.C.”) Julian, starting in glamorous 1920’s Los Angeles, ending with Julian’s mysterious death in 1930’s Shanghai, and provides the backstory to — among other historical events — the swift rise and fall of Leadfield.

Leadfield only briefly appears in a chapter or two during the retelling of Julian’s other escapades. The novel centers on a far more famous stock fraud in Los Angeles. That non-fiction story, in case you are curious and ambitious, is thoroughly detailed in The Great Los Angeles Swindle by Jules Tygiel, a hefty tome compared to the slight 126 pages of C.C. I’ll get to Tygiel’s book… eventually. Even as I write this, the cover is glaring at me from my un-read books pile as if to say, “I will NOT be ignored!” Simmer down, Swindle.

C.C. Julian arrived in Los Angeles in 1922 and proceeded to establish a legitimate oil company, Julian Petroleum (a/k/a Julian Pete). He built his company on the reputation of championing the “little guy,” and sold stock in Julian Pete to investors who couldn’t afford to buy the much pricier oil stocks, held mostly by the wealthy.

Eventually, Julian sold out (was squeezed out?) to those same larger investors, who then exploited Julian Pete by overissuing stock, saddling the company with high-rate loans, and reaping millions until Julian Pete finally collapsed. Julian, meanwhile, did about the exact same thing with stock for claims in Leadfield.

End result = Poor got poorer. Rich got richer. Julian was like a reverse Robin Hood.

My Friends Call Me C.C. reads as having been passionately and professionally researched, and I appreciated how closely the author hewed to maintaining authenticity, as if at any time he could hand you the original source material and say, “See? It’s all true!”

Of course, it’s not all true — dialogue, thoughts, a couple of brief but incongruous sex scenes, and other minor details most certainly had to be invented, even if they all feel justified as “inspired by true events” — but my point isn’t, “Take that out.” My point would be, “Give me more.”

On the other hand, it seems the author’s intention was to present this chapter in fading history like a truly unbiased court case: “Just the facts.” (At least one scene is made up solely of court transcripts; I’m guessing from the original source, but they read a lot like Law & Order.) The back cover even challenges the reader to reach their own conclusions.

I admire the attempt to turn investigative research into fictionalized biography, and on that level this book mostly succeeds. Facts usually ARE more dramatic than fiction. Key word there? “Drama.” A foreword explaining the research process, or an afterword defining the questions and/or the answers left intentionally ambiguous, or even an index of sources — including any or all might have freed the author to heighten the drama of his chosen medium (fiction), and to focus more on storytelling over fact-telling.

The full summary of the 1920’s Los Angeles-based oil (and banking) shenanigans detailed in Tygiel’s book:

The night C.C. Julian made national news by taking a swing at Charlie Chaplin:

Julian’s wife’s response after his failed attempt to have her committed under false mental health claims: