During my two-hour commute to work on Tuesday (45 minutes longer than normal, thanks to… an accident? After 90 minutes of bumper-to-bumper traffic, the road suddenly cleared up with no explanation) I called a few friends usually available at that hour, hoping one of them would talk me through a particularly tedious stretch, when it took me an entire hour to travel two blocks. TWO BLOCKS.

None of my friends picked up the phone.

Or called me back.

At work, my boss fumed repeatedly over her specially-ordered food brought from home that got tossed from the fridge the night before by an over-zealous cleaner who “didn’t notice” the post-it note on the top (still attached to the container when my boss found her missing dinner in the trash can).

“I saw it sitting on the shelf when I left work at 7:00,” another co-worker offered, trying to help narrow down the window of the “crime.”

Then he shot me a look, clearly wondering if I would reveal that he’d skipped out at 6:45  (fifteen minutes early) as he does every night.

(Side note: This is how crimes don’t get solved — small lies being covered by fragile alibis. If the stories of injustice and unsolved mysteries you see on Dateline make you angry, then make a point of telling the truth all the time, if for no other reason than just to stay in practice.)

Anyway, the top stories on the news Tuesday night in Los Angeles were about crimes committed by and against the homeless (fires, public indecency, violence) and what, if anything, is going to be done in response. 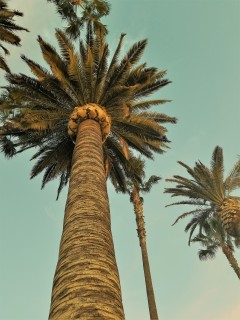 All that to say, those are only a few snapshots of my day. After all that, I sat down and wrote this post.

Seeking inspiration (and not desperate enough to repeat myself with yet another “My Day” post), I asked myself why I don’t write more about the pain and misery around me? There’s certainly no shortage of material.

Answers: Because most everyone processes their own reality 24/7. Because I don’t want to focus on the negative (thereby increasing it). Because I choose not to wake up to angry rants in my inbox, so I have no right to foist mine on others.

(Unless you take my call at the wrong time… ha! Kidding?)

Because, at my best, I write about: not how I “choose” to see the world (because I see both the good and bad), but about the times (past, present and future), places and things that help me endure my 24/7 reality.

Which do you prefer?